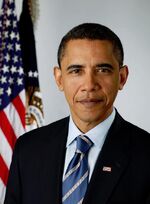 Domestic policy and the economy were the main themes in the first few months of the election campaign, and defense of course was an issue, due of course to the threats from Communist China and North Korea.

President Barack Obama, Democrat from Illinois, was defeated by Republican Mike Huckabee, former Governor of Arkansas. Fifteen states changed allegiance from the 2008 election. Each had voted for the President Obama in 2008 and contributed to Huckabee's landslide Electoral College victory. The selected electors from each of the 51 states and the District of Columbia voted for President and Vice President of the United States on December 15, 2012. Those votes were tallied before a joint session of Congress on January 8, 2013. Ron Paul received 276 votes, and Obama received 262.

One of the most notable aspects of the 2012 election was the election of a woman, Meg Whitman, to the vice-Presidency. While the current Vice-President, Hillary Clinton, was a woman, she was appointed by President Obama after the resignation and subsequent death of Joe Biden.

In January of 2010, President Obama began forming his reelection campaign. He officially announced that he would run for reelection on February 19, 2011. On March 23, moderate-to-conservative former Senator Evan Bayh of Indiana announced that he would be running for President. His more moderate stance appealed to anti-Obama Democrats, and he quickly became a threat to Obama. Senator Joe Lieberman (ID-CT), also announced, and appealed to more conservative Democrats as well. Come the primaries, Bayh won Iowa and Michigan, Lieberman won New Hampshire, and Obama took Nevada, South Carolina, and Florida. Super Tuesday showed mixed results: Obama did well in the South, while Bayh took the Midwest and Lieberman took the Northeast. Lieberman withdrew on that date, and the race became a neck-and-neck fight between Obama and Bayh. Lieberman released all of his delegates, and they flocked to Obama, giving him the nomination.

Beginning in November of 2010, several Republicans announced their intentions to run for President in 2012. Here is an overview:

In 2008, President Barack Obama won the presidency, defeating the Republican nominee, Senator John McCain, in a re-aligning election from Ronald Reagan's Republican Party. After Democratic pickups in the House and Senate from the 2006 elections, Democrats maintained control of both legislative branches of the federal government, and grew to a super majority in the Senate in 2009 with the seating of Senator Al Franken (D-Minnesota)

Obama's approval ratings had held low levels for most of his term, dropping from a high of 69% to a low of 38% by 2010. Obama was elected with a large Electoral College margin in 2008 and a modest majority of the popular vote, and after his first 100 days, Obama's approval rating fell more quickly, with the Ted Kennedy Universal Healthcare Act's passage (to which an overwhelming majority Americans were opposed) the passage of the FY 2010 federal budget, and the crafting of the SAFeT treaty.

By September 2010, Obama's approval rating was holding at 45%, and the Republican Party appeared to have a clear advantage in the upcoming congressional elections. Additionally, the Republicans got closer to the majority in the Senate and held a big majority in the House. Obama's approval ratings continued to hold in the high 30s for the rest of his term.

Huckabee won by 36 electoral votes, carrying 30 of the 50 states. Congress was a mixture of Republicans, Democrats, and Independents. Huckabee's 16% popular vote landslide is not unmatched in actual percentage, and is matched in margin only by Lyndon Johnson and Richard Nixon. He was the first Republican to win California in 24 years (since 1988).

The election was interesting, as it was seen as the ending of the two party system in the U.S. Democrats were nearly extinct in the House, being crushed by a mixture of Republicans and Independents. Most of them were moderate conservatives, and against the far-left, neo-socialist agenda that Obama seemed to support.

In October 2012, without much success on the ground at all, President Obama began withdrawing from the Afghanistan. Huckabee opposed this, as did around 49% of Americans (46% were opposed).

The unemployment rate was 25% and most Americans supported Mike Huckabee on the economy.

There were two debates, one presidential and one vice-presidential. Both were town halls:

Retrieved from "https://future.fandom.com/wiki/United_States_presidential_election,_2012_(Conservative_America)?oldid=198331"
Community content is available under CC-BY-SA unless otherwise noted.