From the ruins of an isolated and declining Russian Federation, to a squabbling and ineffective parliament of the USA, the year 2032 could have seen better days. The Western World has been utterly torn apart into the social democratic Europe and the corporatist United States, whom many Europeans has described as an oligarchy like the Russians. In Africa, water and resource shortages are leading to many civil wars in the DRC, Nigeria and even Ethiopia, while South America is seeing a new wave of socialism or fascism rising across the continent. In Asia, tensions between the minor powers of Turkey, Saudi Arabia and Iran are at an all-time high, while East Asia remains as voliatile as ever, with fears of a Chinese invasion of Taiwan now boiling across the First Island Chain. There is optimism to be held however, as the pace new technologies and space exploration are increasing exponentially. Will humanity cooperate to achieve dreams of a true Galactic domination? Or will humanity be focused on politics and ruin all potential for the future? You decide. Welcome to the Path of Humanity, which is both a map game and a scenario timeline.

Within the span of 10 years, the world's landscape has changed from a divided world with around 200 countries to one dominated by superstates. The most prominent of which is the United States of the Anglosphere, formed in 2026 after a rather controversial referendum meant that the British Isles, Canada, Australia and New Zealand are merged into the United States of America. This new country added 20 more states, and is the world's largest country, even surpassing the Russian Federation. The USA is on paper a liberal democracy, holding free and fair elections. While the country is still liberal and free, the elections are are certainly not fair. The elections are dominated by the former Republicans and the Democrats in America, the former now reformed as the Republican-Tory Coliation (RTC). There are many other factions, like the Anglican Labour Party (ALP) or the CANZUK Party, the latter being a far-right group seeking the total independence of the former Commonwealth nations, but in most cases, the Americans dominate the political landscape. This sense of American superiority within the supposedly "equal and free" Anglosphere rubbed many Britons, Australians, Canadians and Zealanders the wrong way, and perhaps the country is not meant to be after all...

With the Anglosphere forming in 2026, any love between Europe and America is vanished with what they essentially deem "occupation of the British Isles". NATO is disbanded following the referendums, and Macron approached Scholz towards the end of his presidency with a proposal: Merge the Nordic States, Germany, Benelux, Poland, Czechia, Austria and France into the European Federation. After some heated debates, the bill was passed in 2028, and the marriage between France and Germany was made complete on January 1st, 2029 with the European Federation, dominating the landscape of Western Europe. Despite many nations like Spain, Italy or the Balkans wanting to join the EF, the Europeans have so far refused all applications, as they want to stabilize the new nation first before admitting more states. While the EF did allow more parties and is lesser dominated by two parties or member states for that matter, radical groups felt like France and Germany should never be together, and anti-European terrorism is on the rise since 2030, very nearly killing the Prime Minister of the EF, Mario Czaja in 2031.

Across the Polish border, we find the Russian Federation. The Russians have certainly seen better days before this point, with the country being increasingly stale and depressing as days past. Vladimir Putin, the "President" of Russia, is now 79 years old, and although he isn't as fraile and teetering on the verge of death as the Western media would have their citizens believe, he is spending more and more time in hospital for routine checks, leading to some to question if he has much longer to alive. The country is slapped with tens of thousands of sanctions ever since their invasion of Ukraine in 2022, and despite an eventual Russian victory at the end of that year, they were only able to officially annex Crimea and the breakaway areas of Ukraine, a far cry from the areas Putin would have hoped to gain. Later on in the 2020's, Belarus and Kazakhstan were annexed, and Georgia was invaded in 2025, sparking even more sanctions that basically destroyed the Russian economy. The Russians are now effectively cancelled from the entire world, with no internet, no access to the banking system, no trade, and barely any imports or exports. Even China has fallen out with Russia following their annexation of Kazakhstan, leaving the Russians in an isolated mess. The Russian Ruble is even worse off, with hyperinflation being rampant during the financial crisis of 2023, and now the exchange rate is stuck at almost 100,000 to the dollar, despite the fact that the Ruble is now worth less than the Venezuelan Bolivar. The nation seems to be on the verge of total collapse.

In the Middle East, a cold war is emerging between Turkey, Iran and Saudi Arabia. Turkey under Erdogan has been expanding rather rapidly, taking over the failed states of Syria and Lebanon, while an uneasy truce has been established between them and Iraq, with the Turkish annexing all of Kurdistan. Iran has been playing chess with Saudi Arabia along the Persian Gulf, while the tiny state of Israel is basically left on their own with the USA now busy in trying to stabilize the country. Egypt meanwhile is becoming a frightingly powerful country, interfering in the Sudanese-Ethoipian War in 2025, leading to the Second Ethiopian Civil War. In the south, Tanzania and Kenya finally made the East African Republic a reality, becoming a major juggernaut in the region's politics. Meanwhile, Nigeria is still fighting the Boko Haram, as DR Congo falls into another Civil War. Across the entire MENA area, food and water are becoming scarce. Who knows when will a famine break out in the region?

In Asia, the situation is equally dire for all parties involved. Pakistan and India are on the brink of total war after a tense standoff between both sides near Kashmir. The Taliban government in Afghanistan is also looking to the south, trying to reclaim the lands they deemed that they have lost. In China, there has been even more evidence of an all-out genocide of minorities of Turkic people in the region of Xinjiang, and to no one's surprise, China has denied it. The Chinese territory of Hong Kong has practically devolved into a political anarchy zone, with the Yellow and the Blue Camps (i.e. Anti-China or Pro-China) literally carving exclusive territories as if it was the segregation era in America. Raids on both camps by the police or the Hong Kong Free Milita (HKFM) are rampant, all the while Macau is feeling the effects of the collapse of society in Hong Kong, with many refugees coming to the already crowded Macau for a peaceful life. The tensions are also felt in Taiwan, where a buildup of Chinese troops near Kinmen has made the Taiwanese government uneasy. The ramifications of the Sino-Anglo Cold War is most felt across East Asia, where it has developed into a heated conflict between China and Japan. Korea finds itself stuck in between this conflict, still divided in 2032 between the North and the South.

Finally, let's talk about South America. In South America, the region's politics are dominated by the rise of the Socialist Republic of Brazil and the formation of the Federation of Gran Colombia. Compared to the other continents, this continent is rather calm. Although, tensions are rising between Brazil and Argentina, with another mini Cold War happening between Colombia, Brazil and Argentina, fighting for influence in South America. A war might not be immient, but it is on the table for sure. As you can see, 2032 in this world has seen a resurgence of nationalism, extremism, superstates and tensions. It's almost a guareentee that World War III will inevitably eurpt. The question is: When?

Nations that are off-bounds to new players:

Any other country can be played by anyone.

Anyone with prior map game experience can apply. No limit of how many moderators needed.

This is the minimium requirement needed for a turn.

[FLAG OF NATION] [FULL NAME OF YOUR NATION]

This is by no means the only other template you can use, and you can add, erase and rename all parts of this template for your turn. Obivously, do not edit this template.

[FLAG OF NATION] [FULL NAME OF YOUR NATION]

Note: Only the nations that are at war, a superpower or are player controled will be coloured because I am not colouring 150 countries. 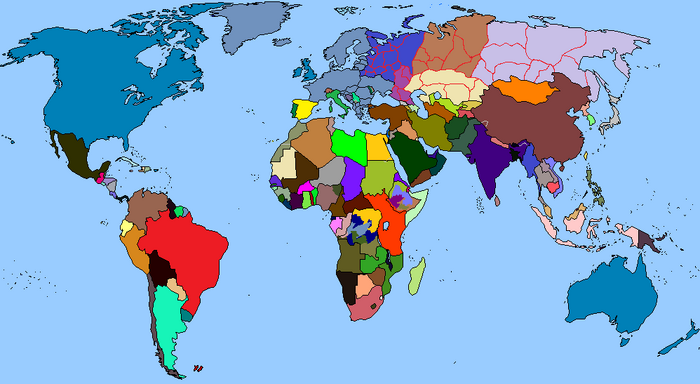 Welcome to 2032. The Anglosphere is holding the craziest election all of the countries have seen in centuries; Russia is about to collapse into multiple warlords, all the while civil wars are happening in Congo and Ethiopia. Tensions are definitely high amongst the superpowers, but who will come out on top?

Welp, the inevitable has happened. As Vladimir Putin dies, the entire country of Russia, along with Belarus and Kazakhstan fell into a massive multi-factional civil war. The absolute state of Russia allowed Ukraine to finally retake Donbas and Crimea, while the EF has occupied Kaliningrad. There are really weird warlords, from ultranationalist Tomsk to anarchist Yakutia. The strongest are mainly Navalny's new Russian Republic, based in Moscow; as well as Dmitry Medvedev's Volgograd Union in the Caucasia region. Will the superpowers do something about it? We'll see.

With the increasing militarization and disorder in the world, chaos seems to be approaching inch by inch. Russia has been split into three main spheres of influence, with the European Federation heavily influencing the West, though not controlling it, the Chinese controlling Central and Eastern Russia, and the United States of the Anglosphere controlling parts of the far East and Northeast. Pakistan and India continue their now 5 year war within the Kashmir region, eventually agreeing on a landmark deal, in which China steps in and buys the territory for 150 billion dollars, ending the war and allowing peace to reign free. Within the USA, talk of various reform is likely to be had, with the various coalitions in a gridlock on what to do. China has effectively blitzed Mongolia and Central Asia as well, losing over one million Chinese Troops, though inflicting 4 million losses on the enemy. The world is seeing conflict and peace, as usual. Will things take a turn for the worse, is a question that needs to be answered.

Well, recent climate issues due to global warming has proven disasterous, with Egypt and Sudan now at war with each oher due to water. War seems to be creeping up across Africa, with Morocco now fighting Algeria and Western Sahara, while the interior of Sahara is at war with each other for control over the River Niger. The DRC has fully fractured into 4 states, two of which were annexed by the Republic of Congo and the EAF. Russia is starting to mend together with Navalny declaring the New Russian Republic, consisting of West Russia, while the Anglos, Chinese and the EF all established their own puppet states in Russia. With China's continued warmongering with their invasion of Japan, and with Europe and Anglosphere trying to mend their relations, is a WW3 on the horizon?

GAME CANCELLED DUE TO BAD MODERATION.