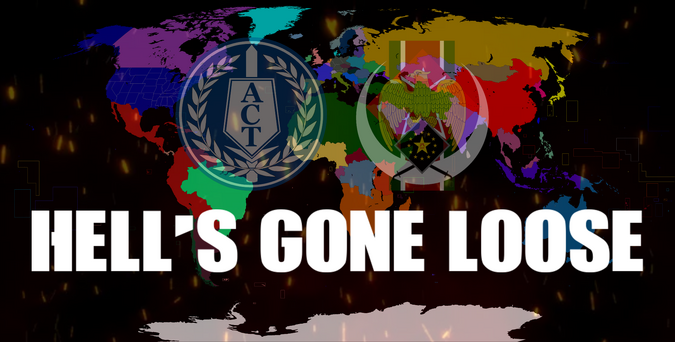 NOTE: This is an Alternate Scenario Base (ASB) and is not to be taken seriously!

Hell's Gone Loose Timeline is an alternate future scenario, created by DewDoritoz and with the contributions of IsraeliMac&Cheese, and was inspired from the Call of Duty: Modern Warfare Trilogy, Red Dawn (2012 Version), Olympus has Fallen, Call of Duty: Advanced Warfare, Call of Duty: Ghosts, Call of Duty: Black Ops, Mercenaries, Mercenaries 2, Ghost Recon: Jungle Storm, Spore, Star Wars. This Timeline takes place between the 2020s and the 2200s...

In an Alternate 2020s, Left-Democrats have retaken power by cheating the 2020 Election, but are later defeated by the Free States of America, a Conservative-Libertarian and Moderate Resistance Group led by an Unknown American called, "The Patriot". During the Second American Revolutionary War (commonly known as the Second American Civil War), The Great American Ripple Effect occurs effecting several nations across the globe, ranging from peaceful affairs to mundane happenings or violent conflicts. Aftermath of the Second American Civil War and the various Destructive Conflicts during Ripple Effect, two new fuels are discovered (making Petroleum obsolete), Newly established nations, and a Third World War on the Way, will the United States of America or it's allies make it out ok... there's no guarantee, but it is possible.