Carpe Diem is slightly different from your typical map game. It mostly acts as an experiment to see if an off-planet map game might make the cut. It takes place on Mars, a planet abandoned by humanity, left to its own devices. Will you make your own story? Will you thrive or barely survive? And will you find out what horrible, disturbing event on Earth lead to this in the first place? Welcome to Carpe Diem.

Silicon Valley tech moguls often talked about "looking to the future" and "the march of progress". First it was social media, then self-driving cars, then AI, and so on. Yet one thing remained on the cusp between science fiction and reality. Martian colonization was often talked about, from financial offices in New York to script writers in Hollywood. As the hype for Mars grew, governments and corporations slowly filled this ever growing demand.

In 2035, the first human Martian mission was a success. The establishment of a base came soon after. Soon enough, multiple bases were established, placed there by rival governments and corporate conglomerates. Mining for resources, as well as permanent habitation came soon after. The small Martian colonies, like a fragile flower, bloomed, as they slowly tried to inch toward self-sufficiency. A slow but steady terraforming process began, and although it failed miserably, several lakes were created near colonial outposts.

The year is now 2135, and there are a multitude of colonies and bases on Mars. However, on a fateful Martian afternoon, all contact was severed with Earth. There was silence, and only silence. Now, these semi self-sufficient colonies must learn to not only survive, but ultimately thrive on a post-Earth world.

Everyone should know map game etiquette by this point. No racism, cursing, implausibility, being an a**hole, or disrespecting and disobeying mods, and this should proceed smoothly. 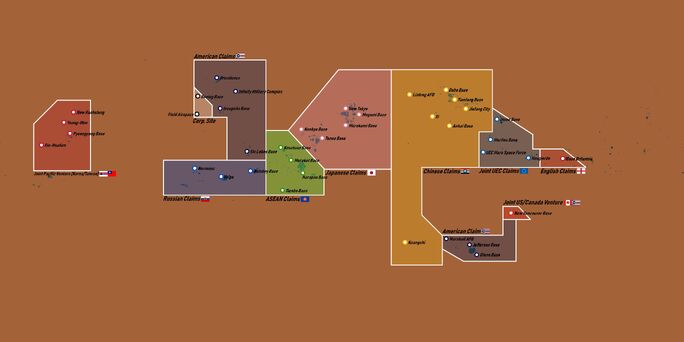 THE MAP IS BARREN FOR A REASON.

Please keep in mind that you only control a base, not the "claims". You may control one base, or a group of bases. However, once you expand to control at least five bases, you will officially become a nation. From there, you can do whatever. It's up to you.

You may add bases, and there are currently only a few bases. You may add more in the country claims (CCs) already provided (China, EU, England, US, Canada), or you may add other CCs from different countries. (i.e Japan, Brazil, Scandinavia, South Africa). Just keep in mind when making a new CC it must be from a country or a corporation. Just don't make your CC too large, or from an obscure or inappropriate country or company name.

The location of your new CC will be chosen at random, unless you specify a location. You may control no more than three bases starting off, and they must all be in the same CC. You can choose the locations and names of your bases (just make sure you use MS Paint or some app to show me where they're located).

Otherwise, tell me your CCs and bases in the comments below or on Discord, and a rough outline will be provided to show what general area you control.

This list will be empty until a player controls more than 4 colonies.

NOW OPEN FOR SIGNUP. List the player and base(s), as well as the CC of your base(s).

All Martian colonies lose contact with Earth, as well as Luna and several other planets. While Martian bases are scrambling to find more information, regular shipments of water and food have stopped. Luckily, the Martian Satellite Network ensures Martian colonies can still communicate with each other.

Without supplies from Earth, trade between the different bases pops up. Anhai Base and Marshall AFB quickly become affluent by trading iron ore and weapons.

Dahe and Tiantang Base descend into anarchy due to a lack of vertical farming procedures, prompting many bases to expand farming operations. Emergency procedures and severe rationing is widely implemented throughout Mars.

With rising tensions across the planet, the first military alliance is formed between Providence and Incognita Base.

Disputes arise between Kenkyo and Tenno Base over nearby lakes and water supplies.

One year after 'The Disconnection', it is clear that contact with Earth will not be re-established anytime soon. Some radio signals are received from the Blue Marble, but it is mostly gibberish.

Marshall Air Force Base flaunts its superior military prowess in a successful attempt to convince Jefferson Base to form a "provisional union" between the two states. Pura Aqueduct is constructed to quickly haul water from Jefferson Lake to Marshall AFB.

The Mars Unity Station, a sprawling space station orbiting Mars, crash lands 140 kilometers south of Tienbo Base, in unclaimed territory. Reports of water, food, and weapon supplies located at the crash site quickly spread across the world, as many bases prepare expedition teams to the area.

A military coup at the Infinity Military Complex occurs, resulting in a change of power in the region.

Genetically modified versions of potato and wheat plants specifically designed to handle the Martian atmosphere and soil are introduced, creating the possibility of massive agriculture operations. While limited only in select Chinese laboratories, their quick spread has led to nearly every base on Mars getting their hands on some seeds.

Roosevelt and Boeing Base run out of fresh water, resulting in total anarchy as thousands perish or flee.

Refugees from Kuangshi found a new colony 300 kilometers south of their former home, Jiating, becoming the first colony established after the Disconnection and the first one without approval from an Earthian government.

Specially manufactured plants that can survive in the harsh Martian landscape and reproduce quickly spread throughout the Six Lakes region in American claims, promising new hope for terraforming.

An artificial lake is made between Incognita and Providence bases, providing fresh water for thousands in the region.

Marshall AFB designs a laser rifle designed for maximum efficiency on the Red Planet, perhaps opening up a new era of Martian warfare.

The 'Infinity State', led by the former Infinity Military Complex, now going by the name of New Washington, begins to harass Providence and Incognita Bases; Boeing base remains unoccupied, although the U.S Field Airspace Dome commandeers a majority of the resource nodes South of the base.

Two people are shot and killed when civilian buggies pass by a previously-abandoned complex southwest of Kenkyo Base, revealing it to be a newfound weapons manufacturing complex. Kenkyo demands that the MNM Cooperative, referring to it quite literally as Shin-Nihon, as well as Tenno Base, stay out of its affairs. Tenno begins to seek entry into the Cooperative.

Liafeng AFB, Xi and Jietang Bases set up the Martian Chinese Republic, a federal state reminiscent of the bases' home nation. The new MCR reaches out to Anhai Base, offering membership.

A singular transmission is heard from Earth, caught by a nearly-disused end of the Martian satellite network. The transmission is garbled for the most part and undecipherable, but what which can be translated from its native German goes as follows:

'...test. Test. We have no confirmation. Satellites are down. Civil insurrection in Arabia. Taiwan-Japan-Korean alliance. Russian civil war. Test. Test. This is not an official member of the German Space Force. I am telling you this because we need to tell you what happened. ...Solar...'

Recent reconnection with Earth brought up the hopes of thousands on the Red Planet, but no Earthian government or entity has made any official plans to bring the populations of Mars back home, nor do many Martians want to return to Earth. It seems the various nations of Earth are still squabbling among themselves over the remaining resources.

Anhai Base and the Martian Chinese Republic (MCR) become hostile towards one another after Anhai refuses to join the nation. Furthermore, Anhai is the largest economic and political rival to the MCR, being the largest trade hub on the entire continent.

From the U.S Field Airspace Dome, a group of scientists make their way to the uninhabited Boeing Base and set up a scientific haven there, 'Big Mountain'. While it is unknown what is being planned there, theories range from technological advances in robotics and gene editing to building a thermonuclear bomb.

The several colonies of Luna have made contact with Mars once again, and it appears the majority of Luna has joined a singular alliance, the "Lunar Hall".

Chinese refugees from the various collapsed bases make the dangerous trek to other inhabited bases, the most popular destinations being the European or Japanese colonies.

The Fourth World War promptly ends with an American victory, although the Russian rebels persist throughout Siberia, and the Chinese Civil War goes on. American agencies make plans to begin sending resources to American bases, and demand that Infinity Base cease rebellion at once. The first ships will arrive in the next year.

An explosion near Kenkyo Base is recorded, although no damage is caused. It is speculated that it[the explosion] may be an explosive weapon.

Independent teams discover scores of gold, aluminium, and bauxite between the English and Joint Taiwan-Korean claims. This sparks speculation as Base Britannia and others begin to send expeditions to the area to claim resource nodes.

Retrieved from "https://future.fandom.com/wiki/Carpe_Diem:_Map_Game?oldid=277348"
Community content is available under CC-BY-SA unless otherwise noted.